Effective issue framing puts information into a context that makes it easy to absorb and interpret by employing core themes that connect the dots across issues and tapping deeply held social values.

The Sustainable Production and Consumption Framing Research Summary outlines framing barriers and opportunities to consider when communicating about consumption issues. 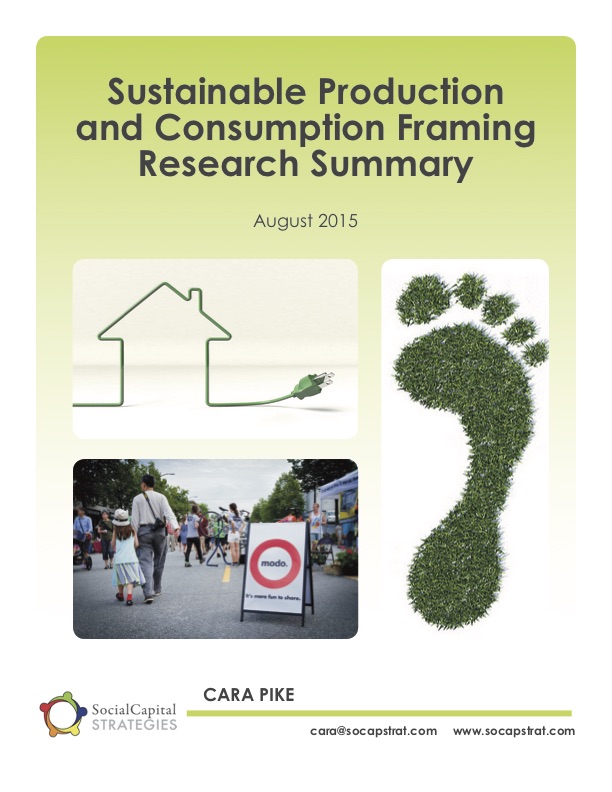 Emphasizing how sustainable consumption can help provide for human needs (material, psychological, and social) can serve as an effective frame to build initiative-specific messaging.

Emphasizing how sustainable consumption can help provide for human needs (material, psychological, and social) can serve as an effective frame to build initiative-specific messaging.  Highlighting the following benefits and values that sustainable consumption promotes can serve as a launch point for conversations with colleagues and your community:

Americans overwhelmingly believe that the way we live creates too much waste but there are few, if any, mainstream visions of what a less wasteful lifestyle looks like in the United States and Canada. For Americans and Canadians to act on their belief, they must be presented with a clearly articulated picture “of what producing and consuming less means on a practical level, and how the transition away from the current growth and consumption-based economic model begins.”

Developing this picture in a way that is appealing and believable for your community may be one of the greatest challenges and one of the most convincing elements of a communication strategy -- and building a new narrative for the American Dream may be the cornerstone. Hope lies in the fact that Americans see the American Dream as much more than achieving affluence. It also includes the following elements that could be used to create a narrative about your community’s identity:

To build an audience that reaches beyond the “super greens”—who make up between 16-25% of the American public—and captivates the group that is interested but not yet acting, practitioners need to focus on untapped groups with which they can build common ground, and speak to the issues of that most concern them.

One promising group to focus on is younger adults. This cohort’s messaging campaigns  should be geared toward their value set, which can vary significantly from environmentalist baby boomers. Younger adults may be less civically engaged than older generations but they tend to have more pro-environment perspectives and are supportive of climate action. Additionally, they largely reject the idea that jobs creation and environmental protection are at odds. Emerging trends include this group’s orientation toward more walkable cities, use of public transit over car ownership, and participation in sharing activities.

Thought leader Douglas Holt has identified a subset of younger adults as the “New Main Street” of Americans. This group is college educated and/or are recent graduates who struggle to leverage their degrees. They are likely to work in the service, clerical, retail, and labor sectors. Finding living wage jobs with benefits are one of their primary concerns. While environmental impacts are not this group’s primary focus, communications can leverage other sustainability benefits such as economic security, health, and quality of life issues..

While the varying primary specific concerns of community groups may present a challenge, common ground for sustainable consumption initiatives may ultimately be found by leveraging your community’s commonly held values, as described above.

With a wide range of messages and advice available through myriad media, choosing the best actions to take can be confusing and ultimately lead to frustration or lack of action among community members and City staff. Engaging interested parties will require specific, actionable suggestions with measurable outcomes, regardless of whether the target is City departments or members of the public.

Messages that emphasize ‘what we gain’ over ‘what we must give up’, and highlight the benefits to individuals, families and communities should prove more successful in avoiding the following common pitfalls:

Environmental aspects and benefits of sustainable consumption should not be ignored. However, it may be best to list them as co-benefits and not as the primary drivers for initiatives. “While the environmental orientation appeals to the eco-minded, sustainability is not [a priority] for those who do not prioritize environmental values and/or may be put off by the perception that environmentalists are elitists and out of touch with the realities and needs of the average citizen.”

Academics and nonprofit leaders sometimes use theoretical, global or overly specific language that is unfamiliar or off-putting to the general public. Although “...concepts such as circular economy, collaborative consumption, or low carbon futures may be intuitive to those close to the issue, public understanding or relevancy cannot be assumed.”

The “curse of consciousness” can occur when a person engages with sustainable consumption choices. For many, “guilt is a major barrier to engagement” and becoming aware of the negative consequences of current or past decisions can create a level of guilt that makes the newly awakened wish they could be ignorant to the issues.

Individuals may also feel ostracized, ”...for their green attitudes (i.e. holier than thou stigma), or experience discomfort with unwanted attention (i.e. check out what the hippie/crunchy granola is doing).” This stigma can lead to feelings of social isolation, and alleviating that isolation may have a more powerful influence  than behaving in ways that align with a community member’s sustainability values.

Pitfall: Focusing on individual actions instead of systemic changes

This research reveals that a sense of fatalism can come about from focusing on individual lifestyle choices as opposed to larger systemic change. Individuals may believe that although they are willing to change their behaviors, others are not willing to do so, which limits the amount of impact they are making.  The effects of overemphasizing individual choice can compound when systems that would enable these changes are either inaccessible or nonexistent (e.g., consumers may not choose to repair instead of buying new if they don’t live or work near a repair business).